I really love reading all about everyone's pony genes. Thanks Emma for the non-formal blog hop! Some of you may remember way back when I use to do a Throw Back Thursday: Bloodline edition on some of my horses. I would pick a horse out of their lines and give some history on them. I always enjoyed sharing about Bacon's lines in particular, because I love thoroughbred racing. I am still trying to dip my toe in to the sport horse world, and I am slowly learning which thoroughbred lines show some sport horse promise. So let's have a look at Bacon.
Bacon was trained at the track for 2 years, but was never raced because her race owner never registered her. Her trainer had confiscated her, her brother, and her dam because she did not pay him, and by the time he found out, her registration would be quite spendy. Enter me!
Bacon is by Sought After, a Kentucky bred stallion who was unraced. He is by the awesome Seeking The Gold, out of Smolensk (a Danzig daughter). Sought After was based in California, but was euthanized last year due to laminitis. Upon some digging on USEF, it looks like he has five horses registered their. Four are decent eventers, with one dressage pony.

Seeking the Gold is a winner of $2.3 million, and grabbed wins in the Super Derby-G1, Dwyer Stakes-G1, Peter Pan Stakes-G2, and the Swale Stakes, as well as placed second in the Breeders Cup Classic-G1, Travers Stakes-G1, Haskell Invitational Stakes-G1, Wood Memorial Invitational Stakes-G1, Metropolitan Handicap-G1, and the Gotham Stakes-G2. He was a tough cookie, and just recently passed away this year. And, according to USEF, has produced anything from hunters to jumpers to eventers! But mostly hunters.
Smolensk was a multiple French group winner, and earned a nice $227,806 out of 12 starts. She produced two stakes winner, grade II winner Can The Man (Into Mischief) and listed stakes winner Martha's Moon (Malibu Moon).
If we take a look at Bacon's damn line, you will see that she is out of The Borg Queen, one mean ass giant red mare. She earned herself $186,340 out of 26 starts. She placed in one stakes race, but spent most of her time in the claiming races, winning 7 of them. She is by Fruition and out of a mare by Olympic Native.
Fruition showed a lot of promise. He won his debut impressively at Hollywood Park earning a Beyer Speed Figure of 105, one of the highest ever earned by a first-time starting 2-year-old. Fruition was injured when kicked in the shoulder by another horse a few weeks later, and despite two long layoffs,and was able to return to his best form. He started 10 times and earned $69,380.
If we look at Olympic Native, we will see that he did fairly well, bringing in $138,050 and setting a new 7 furlong track record at Del Mar. I was unable to find anything else on him though.

Further down the line, you have greats like Buckpasser (2x), Tom Fool, Mr. Prospector (2x), Native Dancer (3x), Blushing Groom, Raise a Native (all over the place), and Woodman. Now I am not sure how she looks from a sport horse perspective, but I do know that Mr. Prospector was not known for great feet ( I can confirm that) and the owners of her brother, Bruisyard Hall, really like those by Fruition. And with her brother currently competing successfully in some CCI 2*, they probably know what they
So, there you go. Some of the Bacon lineage. You can explore more if you would like via the graphic below! 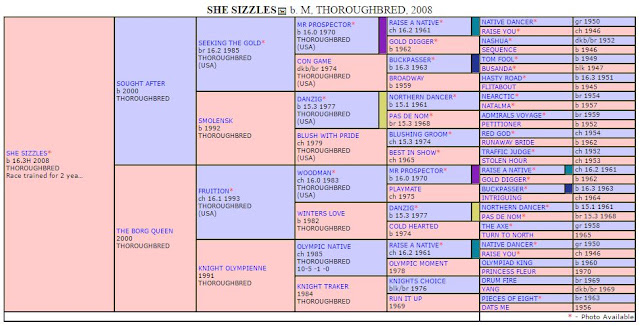 Posted by HolyBully at 6:30 AM