I have a goose! 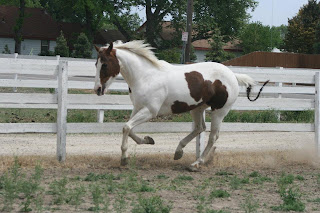 So, Lucy had found herself a new home. Away from a ranch, away from everything that she had known for the last 13 years of her life. It took her a while to adjust, but she figured it out pretty quick. She got the lunging thing down right away, and I was enamored by her big floaty trot. I tried to tell Blake that she would be a nice beginner dressage horse, but I got a quick "NO" as a reply. No english saddles ever allowed on her back. Fine. 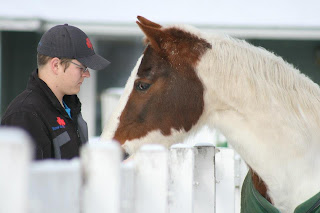 We had some issues with her head (which we still do) and we noticed right away. Any time she felt pressure around her head or on her halter, she would react by throwing her head abruptly back and running backwards. Her previous owner had led her out of the trailer with the lead rope going up and around the back of her head and through the bottom of the halter. It was the weirdest thing I had ever seen. Her poll was also huge, way bigger than any other horse I had seen. She had also never been loped to my knowledge, because whenever we asked her to, her legs became a scrambled mess and she would panic. But, despite her issues, we found her to be very willing and extremely smart. She would always try to do her best. And she was the easiest keeper ever! 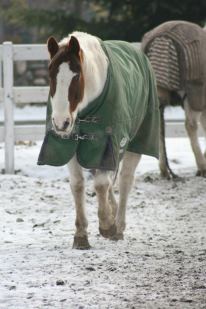 We wanted to start loping her more (since we are aimed at reining stuff) and she started out ok. The basic green horse HOLY COW I AM RUNNING AND DON'T KNOW WHAT TO DO, SO I AM GOING TO DIVE MY SHOULDER ALMOST PARALLEL TO THE GROUND AND RUN FASTER AND FASTER. Ok, I can deal. Halfway through the summer of 2012 though, something switched and she became panicked every time we got on her, and she exhibited symptoms of upper fixation of her patellar region. We would barely touch her to ask her to move her hindquarters over, and she would flip out, running backwards, half rearing, throwing her head back into my face, etc. None of this was fun. And none of it made Blake want to ride. 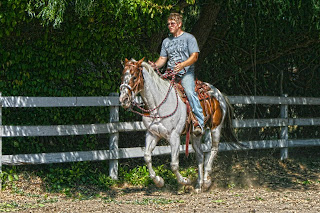 We had her teeth done, and eventually had a chiropractor come out. He was amazed at the size of her poll, and showed us a spot on her back that was not quite right. He worked his magic, and it went away. I had never seen Lucy so relaxed, it was amazing. I rode her twice after that, and she seemed fine-ish again. And then winter hit. 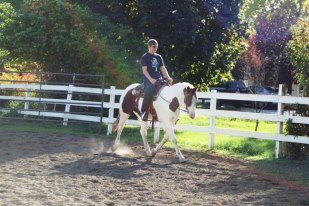 We started this year with one OK ride, one great trail ride, one tying up episode, and two crazy galloping around like an idiot and being dangerous rides. One of the dangerous rides was yesterday, where she began to rear and be stupid. I draw the line at rearing. She got in big trouble. Now, I am again stuck and don't know what to do. I feel like I am a little short on confidence with rearing horses, as well as time to be consistent with her, and limited resources for getting around this with training. I would never claim to be an amazing trainer, and I am not afraid to notice when I have exceeded my limits in knowledge. So, I may be trying to ride through this, with more focusing on lunging and getting her quiet on the line for a couple of weeks (even though she is already quiet?) and then getting on, or scraping up the little money we have to send her to my trainer of world champion mules. I could really use the money to get radiographs of Bacon's legs (which I will explain later) but I can't help but notice how discouraged Blake is becoming about his horse. Sigh. 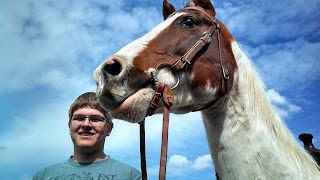