Hello all. It's me. That one person trying to widdle away at all the art that's been a little backed up. I am so sorry if it is taking longer than you have expected. Believe me, it is killing me too to be off of schedule and to be behind. I thought I would share with you the ones I have gotten done so far so you can see what I have been up to though!

First up, the handsome Stinker, swimming in a sea of purple. Because his mother knows that that is the color of royalty and coolness.
We have Mr. Archer Burke. Signature arrows included in his mixed media portrait. 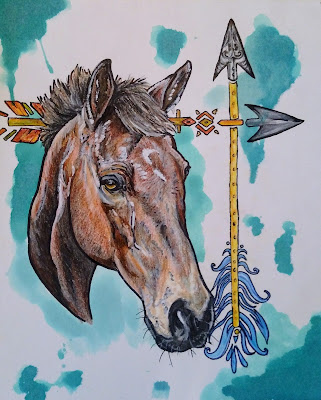 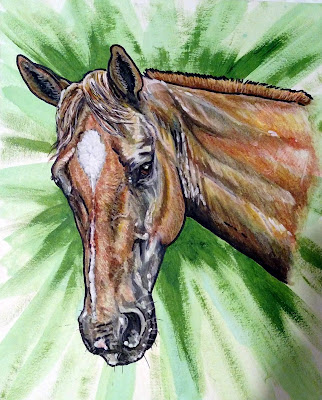 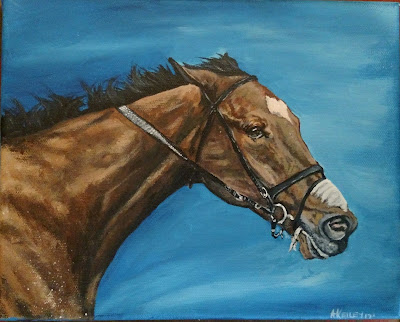 Stephanie had her two kids and a special secret one done, so here is the all too handsome Moe and suspicious Gina. 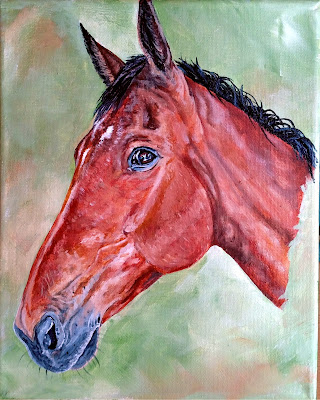 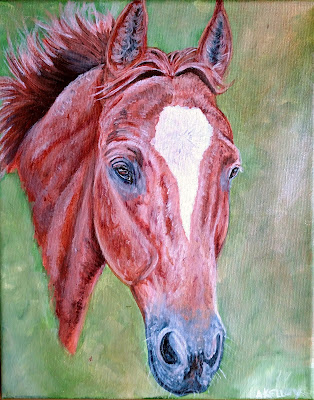 Up next is Katherine from Rodney's Saga for the handsome Rodney himself in mixed media. Look at that face. It's a great face. 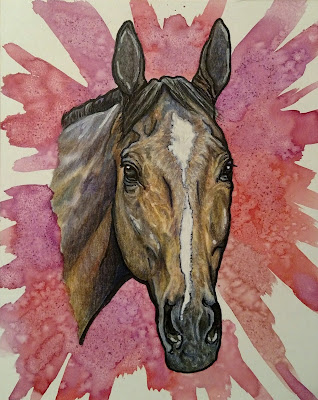 Currently, I have about twelve more blogger art pieces to go. Crazy huh? And overwhelming. I got offered to do the covers for the Spokane Horse Trials programs as well as a business logo for a local dressage start up. I'm feeling a bit nauseous, but I can get it done. I will.

There are a few other reasons why the art work has been a little slower at being produced. My drawing and painting hand has started to radiate pain so I have only been able to work a few hours a day before I can't stand it anymore. I am not sure if there is a brace or something I can wear, but it is not fun. I've just been in a lot of pain in general, but such is life.
A couple of weeks ago, Blake's great grandmother passed away. She was an amazingly kind and sweet woman. If you think you've met the sweetest person, I know you would be lying because I know you would have never met Nathelle. She bought Lucy for Blake when she saw how small Pandora was for him. And was always trying to slip money into our pockets or vehicles. I cut a little piece of Lucy's tail, braided it, and wrapped it around a rose to place with her casket at the funeral because she always loved to here about Lucy. We will miss her so much.

Three days after Nathelle had passed, my friend E's mom kind of suddenly passed away as well. I was with her on Saturday when the doctor told her that her mom had about 3-6 months, maybe a year left. They brought her home Tuesday, where she was feisty as ever, ate and slept well and her husband came home around lunch time to make her a snack to find that she had passed in her sleep. E dealt with the passing better than I would have, but it was still heartbreaking and awful.
My mom has been going in and out of hospitals doing different testing procedures and finally had a sit down with the doctors. The short of it is that she needs a lung transplant. She has no healthy lung capacity or tissue left. She also has some liver damage and free fluid in her belly that they will have to investigate more. Right now, we are uncertain if she can be a candidate. First things first, no more smoking or vaping for at least 6 months to be considered. Her past drug history will probably not help her, but I am unsure of that. They also have to see the results of the further testing. So right now, I am trying to be optimistic, but also trying to prepare myself for the worst.It will be about a year or so if she can get the transplant, so fingers and toes are crossed. It just really sucks.
But you just have to look ahead and know that you will come out on the other side. You may not like the journey through some of those paths, but there are some good ones in there. Like the Bacon and Blake paths. And some days, Lyme disease screws with your balance and makes you walk into a walk, flinging your chocolate cream pie onto the carpet (Tuesday). Those paths aren't so great. But they are there to remind you that you are a person and you are alive, and that is a good thing. So deal with it.
I'm figuring it out. While doing your art. Slowly. And trying not to fling pie into the carpet. So send me hugs and send my mom positive liver, belly (her words), and lung vibes. Thank you.