After the magical roan pony was captured, it was a whooooole different story. She did whatever Blake wanted her to do, and avoided me at all costs. I was the evil person that captured her, after all. She started to look less emaciated and more like a healthy happy girl. After a couple of months passed, we still tried to get her papers going through her previous owner. There was always some excuse. AKA lazy witchness. Blake's approach to horses is probably quite a bit different from a lot of people's. At every chance he gets, he runs, jumps, makes crazy sounds, grabs, dances, and does whatever weird maneuver her can to them until they just don't care anymore. The boy is amazing at groundwork. Whenever I have a problem, I hand a horse over to Blake, and he uses his magical skills. 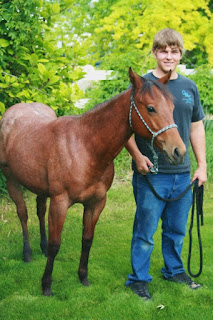 We took Pandora with us to all of the shows that Vegas went to. Blake even showed her in some in-hand trail classes a few times and halter once. She placed 4th in halter, which Blake was pretty excited about (even though they both looked like they were falling asleep). They also did fairly well in their trail classes. But everyone thought Pandora was a POA, and he certrainly was not amused. At this point, he was still not too worried about her size, but I had a feeling she would never be a big lady. 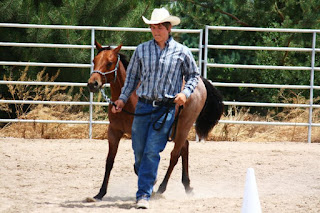 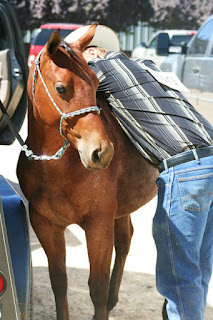 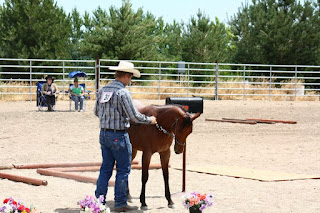 We also dragged Pandora to my lesson sessions with Karaly and Tim. Everybody was always worried when we left Pandora in the pen with all of the giant horses and mules that were fairly aggressive. But, when we came back, she had all of those horses obeying her orders. And I mean ALL of them! Even the 17H mules! Pandora doesn't take crap from anybody but her older sister, Vegas.

Posted by HolyBully at 8:52 AM