Sorry folks! I have had some massive headaches this past week...don't know what's up but hopefully they go away....Anywho. Let us continue with the story of the mighty midget, Pandora!

This had to be the most difficult horse we had ever worked with. That didn't say much for Blake, because he really hadn't worked with a lot of horses, but he had natural horse handling skills (score for me!). Blake would sit in the middle or side of the round pen and do his homework. He would sit there for 2 hours, and that horse would not look at him once. She avoided all eye contact and wasn't even curious about people and even acknowledged the fact that we provided food for her. We would lunge her, and get her to turn in, but it was rather difficult, and she never stayed there long. We would work her, and let her stop and relax next to me on the other side of the fence to show her that people were a good thing. But she didn't really buy into it. After about 2 weeks, Blake decided that he would rope her. He has NO roping skills, so he tried a few swings but quickly realized that his little cutter bred horse had figured out this game and very quickly avoided all of his attempts at playing cowboy. I suggested that I hold one side of the loop in the rope, and he holds the other side, and lunge her into it. And, it worked! But holy crap that little horse can buck! 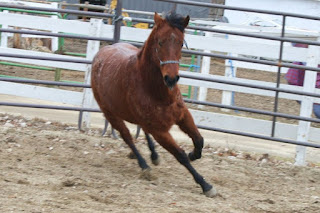 She bucked and wheeled around and ran and ran some more. He finally go her attention and got her to stop and somewhat have her front end aimed at him. Though, I still think she was avoiding eye contact. He tried to pull her around with the rope around her and start to teach her pressure and release. It was obvious she was smart. She figured it out quick, and we thought that would be a good place to stop. She let Blake get within 5 feet, and he took the loop off. She ran to the side and ignored us. We came out again, and roped her again, although it was much more difficult to lunge her into the loop. She fought again, but not as much. She pictured Blake as the bad guy in all of this, so Blake lunged her next to me, and stopped her by my side of the fence. I reached out, and touched her butt. She flinched, but stayed there. I rubbed and rubbed and was soon to rub all over her butt. I switched places with Blake and could get within a few feet of her. It took about an hour, but I could reach out and rub her butt. Then, I could rub her shoulder. She was very touchy about he head area, so it took a while to move my hand up her neck towards her head. Blake handed me her rope halter, and I rubbed her neck with it and put my arm over the other side of her neck and continued rubbing. We use rope halters, so I tied it quite loose around her neck. Now, I just had to fling it up over her nose, the one area she would NOT let me touch. I flung as quick as I could, she took off in a blur, and... 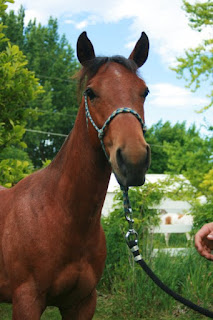 I got it on. Boom. I was able to get up to her again, and clip the lead rope on. And just like that, she decided I was the most evil person in the universe. And just like that, she automatically knew how to lead. Blake came back in, and it was like she had been haltered and led around her entire life. Blake started to rub on her. He was so happy to finally be able to touch his horse and get her attention. We entered her box. It wasn't long after that that he started to turn her into his perfect bombproof pony.
Posted by HolyBully at 7:32 PM