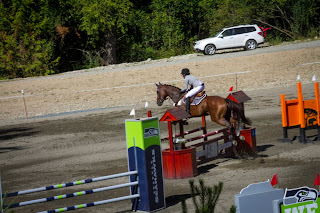 If you think I was ulcering up for xc, you would be surprised to find that my stomach had turned into just a ball of acid by the time show jumping had rolled around. Saturday night, after returning late from the show party, we saw that the course was set up and proceeded to walk it in the dark. I probably should have just waited to walk it until the morning because I just laid awake thinking about the course all night long. This bending line to that bending line. Would she lock onto one of the other jumps while going through the bending lines? Could I get her to the base of the triple bar? Could I get her to ride that first line in six? What about that vertical to oxer in the last combo? 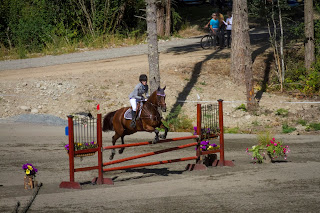 It was taxing. My friends' say I am a lot like Bacon and sometimes I don't see it. But thinking about that, and seeing how I worry about any and everything like a certain bay mare, I can see where they get that idea from. We walked it again in daylight, this time with E's trainer, and I tried to keep up and listen for the pieces that would fit Bacon and I's ride. We watched the advanced riders go, who all made the course look easy, but almost all took the same vertical down, and I went off to braid my horse. E got to watch a couple of the prelim riders go and stated that a certain oxer was also getting a lot of horses because they weren't being ridden forward to it, so I put that in my memory bank as well. Soon it was time to tack up and head over. 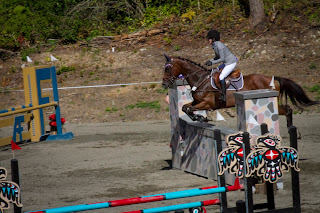 Bacon warmed up like a dragon in heat. I figured she would be a tad tired by now, but I guess not. She was jumping fairly well, but was strong and her haunches were doing a special dance going all directions. I was struggling, as my body began to radiate pain weirdly throughout. Not just my normal joint or muscle pain. I don't even know how to describe it. I just knew it wasn't happy. But it was time for us to go in. I did not ride to the first jump totally forward, which screwed up our distance to the second jump. I buried her at the second fence, causing a rail. That flustered me for a second, body getting heavier and more painful with each stride as I shook it off and tried to get us in balance for the triple bar. 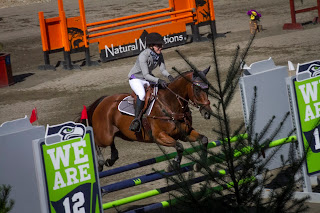 As we went around the course, I could tell things were getting worse. I remembered to ride forward to the oxer at four and Bacon jumped it well. She jumped cleanly over the vertical that everyone was taking down, which took me by surprise and then caused me to pick a poor line to our first combo and she jumped it awkwardly, but clean. Right at jump seven, my chest squeezed tight, I gasped and my body stung. Bacon hit the rail hard, but it stayed. I don't remember much of the course from here. I just basically steered her towards the rest of the jumps and she did what she was supposed to do. She finished the course off nicely, and we ended with our four jump faults. She calmly walked out of the ring, a totally different horse from warm up as I looked around for help. 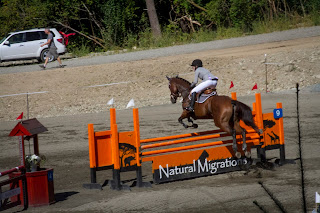 E asked how the course rode as we walked by and I couldn't answer. I was still fighting to catch a real breathe. The lady handing out plaques noticed me struggling. I told her I needed my inhaler. Blake had it, but he was videoing E's round, who was a ride or two after me, and to not disturb him until he was finished. My body tremors started to kick in and apparently that scared her because she ran off to grab the EMTs and I heard them announce for them on the loud speaker. I was horrified. I did not need EMTs. I just needed to rest, catch my breath and my inhaler. But tremors, they don't look friendly, and people don't believe you when you tell them they are normal. They arrived and gathered around me, all the while Bacon is holding completely still, and wanted me to get down. I told them I would like to stay on please, it is worse for me to get down. My body just kind of turns into putty, so, I am more comfortable sitting on my horse. She wasn't going anywhere, she knows the drill. Blake arrived with my inhaler. I drank some water. Everything started to calm down.

I was pleased to find out that Bacon and I had made it into the ribbons. We were called into the arena with everyone, and I laughed when I found out we were ninth place. Another grey ribbon to add to our collection. Our fifth one (three ninths, two fourths). I was just tickled to have gotten some satin. Bacon was a good sport about not being able to see out of her left eye for her victory gallop too, due to her ribbon. She seemed like an old pro for her victory gallop, which cracks me up. 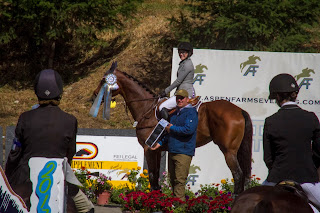 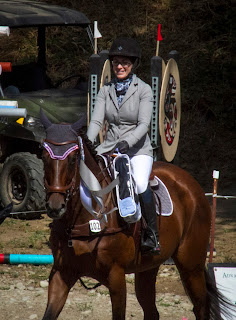 Overall, I really loved Aspen. We got lucky with the weather, it only sprinkled a little bit one night. But it is an excellent facility and the vibe was just great. I hope to be back there next year. But this means our season has come to a close. I am very grateful that I was able to go to as many shows as we did. We saw a lot of new places, went to new states and moved up a level. My horse carried me over jumps I never thought I would do in a million years. Challenged me in new ways, both as a rider and in my general horsemanship, and she took care of me more times than I can count. It was a great year with my best girl! 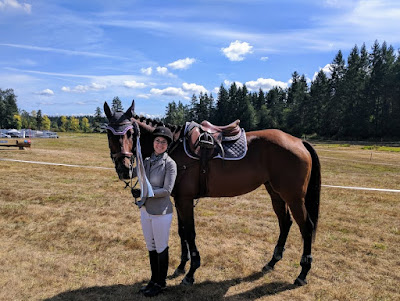 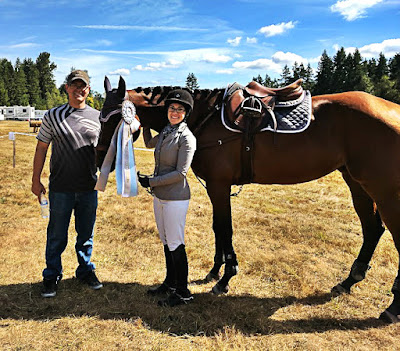