So, somehow Bacon and I qualified for our area championships. And I decided to give it a whirl. I also forgot to mention in my last post that upon arriving home from the last show, Bacon slipped out of the trailer and lept back in, throwing all of herself directly into the path of my thumb. Promptly dislocating it. I was able to back her off the trailer correctly, and get her around to the back of my house and get half of her shipping boots off before I couldn't stand it anymore. I gave it a few sharp wiggles and then there was a giant POP complete with blinding pain, and then I was able to slightly move it again. I thought it would stop hurting by now. That is false.
Anyways, yes. I signed up for the Training Rider division because why not. I did, however, want a vet to come out beforehand and check out Bacon's SI joint and see if it needed some tender loving care. I was correct. Poor mare was sedated and was still trying to kick out while they were scrubbing the area. I'm sorry Bacy. Not only did she receive a giant needle stabbing to the butt, but she got some extra juice in her coffin joints as well. And lots of rest. Plus all of the smoke and heat did not want us doing too much anyways.
Us girls loaded up early Wednesday morning and we headed out on funky routes to Aspen to avoid the fires and road closures. It was a smoke fest all the way up there though, with Cle Elum being our gas stop and them also being in a level one evacuation. It sucked. We were happy to pull in to Aspen finally, and I was super excited because I have always wanted to compete there. It looked awesome. They have the barns spaced out in groups and everything is kind of placed just far enough away from each other that even though it is a large event, it doesn't feel too busy or chaotic. I thought Bacon might like the quietness of our barn area, especially because we were the first ones there, but she was fired up. She never settled in quite like she did at Rebecca or Stanton. Which gave me ulcers. But it is what it is. After we set up camp, we went into town for some Mexican foods and then went to bed. I hate a dream where Bacon died, and then never really went back to sleep, and then thought my friend E kept trying to hog the bed, so I kept moving away from her touch. Only to find that it was the chihuahua seeking warmth. Sorry tiny dog.
We went off for breakfast that morning before coming back and riding the ponies. Bacon started off alright, even giving me a little stretchy trot, before I could feel the tension taking over and her brain checking out. She was getting heavier and heavier, with more and more head shaking and crookedness, and when I tried cantering she though about bolting instead. I got off and headed towards the lunging arena to save my energy a little bit. She behaved herself well in there and I was pleased with that. I thought I would take her back out later that day and try to ride her again to end on a more positive note.
Well. That was wishful thinking. She came out way worse. She was even more tense and more strong and I could half halt a trillion times over and she wouldn't do a damn thing about it, but if I strongly half halted she would get extremely offended and come unglued. I was at a loss. I just kept trying to ride softly and bend her and ask for lateral movements, and she went around like she was pissed off and drunk. There were even more horses in the arena now and I was doing my best to stay out of the way. I saw that the smaller arena became available, so I went over there, but unfortunately, others followed. Others watched and whispered and pointed as I rode passed and I did my best to keep my head up and just keep on trying. All I knew was that I did not feel like I belonged that, and that I certainly didn't feel like a champion. I was exhausted and defeated and threw in the towel, wanting to walk back home to Idaho, and terrified to embarrass myself the next day.

Later that night the boys arrived and told Blake of my sorrows. We planned to give Bacon a light lunge in the morning and then maybe once more right before I got on because that seemed to help her brain the most. I did not sleep a lick that night. That morning, I got up and took her for a long walk first thing. That really settled her down. She lunged quite well and seemed happy to go to work. I put her away and hoped for the best. After tacking up, I lunged her for another 10 minutes before getting on. She was very quiet and almost lazy, but still not really wanting to do her downward transitions all the way going to the right. I just rolled with it and got on. She happily hacked over to the warm up ring, which was very busy. I was almost frozen on her when we got in there because I didn't want to awaken the beast. We walked on a long loose rein and she was very quiet. I sighed and picked up the reins, asked for trot. Quiet. Changed directions, bending, lateral work, all quiet. Canter work, quiet. I quit there. I probably should have asked for trot lengthenings or stretchy trot, but I just couldn't. It was then time to go in. 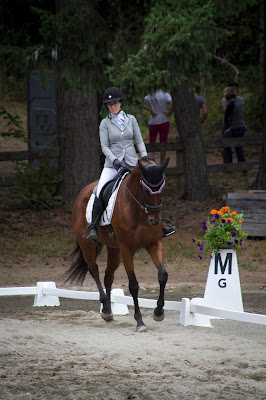 She immediately woke up a little bit upon entering that ring. I am sure some of that was me. I just tried to stay quiet. I rode a very conservative test, and didn't push for anything. It is very obvious, which is not very champion-like, but better than explosive in my opinion. She got a little stiff and bracey and opinionated in there, and always always takes advantage of the stretchy trot circle as an opportunity to trot as fast as she wants on the forehand with no stretch whatsoever. So that sucked. But, overall, better than my last two dressage tests and way better than I thought it was going to end up according to the previous day's ride. So I was smiling when I came out of the ring, even though I knew we would be in last place most likely again. I did not look at my score that day, but E did, and she was also competing in my division on her thoroughbred. And it seemed like there was quite a bit of inconsistency with this judge's scoring, and a general dislike for thoroughbreds overall, so that was a little disappointing. But, that is the way the game is played sometimes. She did like our turnout, however. We ended up with a score of 42.1.