And Then, There Was Dressage.


First, thank you everyone for your kind comments! You guys are so uplifting, it makes living as a couch potato not so bad all of the time!
I think most of the equine world has figured out that most eventers don't event for their great love of dressage. If that was the case, I think most of them would just dressage it up, all of the time. I know there is a few of you weirdos out there that are the opposite (what is wrong with you?!) and live for the dressage part of eventing. That must be pretty awesome and I look up to you.
But. Well. Dangit. Dressage, y must u be in my way of all the jumps?

I know I know, it is good. For everything. And I need to get better at it to do well in this whole eventing business. If I could take the relaxation I have when I am about to do a cross country course and use those vibes for dressage, that would be great.
We pulled into the new-to-me event grounds on Sunday morning, and I was less numb than I had been at my previous event derbies. Well, that's always good! And they had free apple cider and people I really like there. Extra bonus. I unloaded the weaving beast and she posed dramatically for about 5 minutes as she took in her surroundings.

What a cute little event stable. We took our time to get me tacked up and out for warm up as I was last to go, and the only one in the Beginner Novice division. I told myself that I wanted to get a better score than I had got on the same test back in July. I believe I had received a 47.5 on my last score, and thought that it was fairly deserving. We were tight and shuffly and did one maybe ok canter circle and one teeny tiny one, and she was bracing hard and didn't do her transitions well. And I didn't help.
We had a better warm up this time though, as I learned from last time's experience that Bacon does not need a terribly long strung out warm up. Linds had me really working on trying to keep her stretching lower into the bit and hopefully listening and relaxing off of my leg. We wanted low-key, calm transitions and to keep her light and happy. She kept staring at some damn cows out in the field, but that was about as exciting as she got. And then BAM. It was time to...shine?

We had some music blasting, which was fun, but it was not of the relaxing kind. Eh. And as we trotted around the outside of the ring, the wind began to pick up and rattle the corn stalks, and all of the other horses had left the area. Oh boy. I tried to keep Bacon longer and lower than her normal high and tight look. The bell rang, and we entered at A. 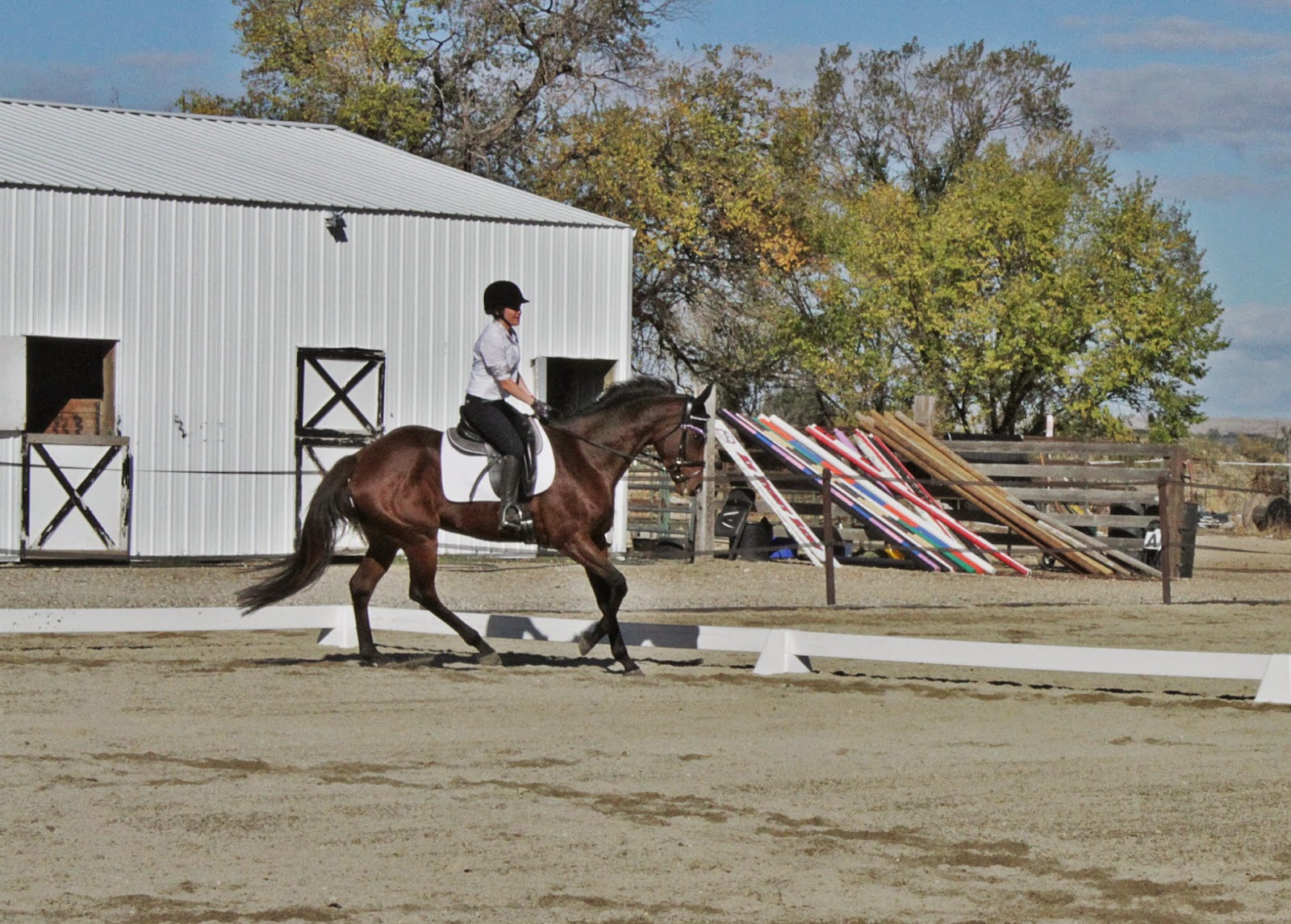 I tried to keep looking up and forward and keep my horse responding to me and my leg. I don't remember much of the test because my nerves ate my memories, but I do think that we had some nice areas in the test, as well as some "oh-noes". Our circles were better, especially our canter circles, she was a little rounder and softer in appearance and we had a little more forward in this test. One big giant fat fault of mine was I forgot my test for a split second. I almost crapped my pants, but didn't, and then saved my ass instead. But that little move made us look a bit crooked and out of control. Our free walk was our best yet, but still crappy, and it hurt us the most. Our transitions were better, even though she was bracing pretty hard at some parts. We had some issues with bend again and I need to get my damn hands out of my lap. But overall, it was pretty good. We even had a square halt! 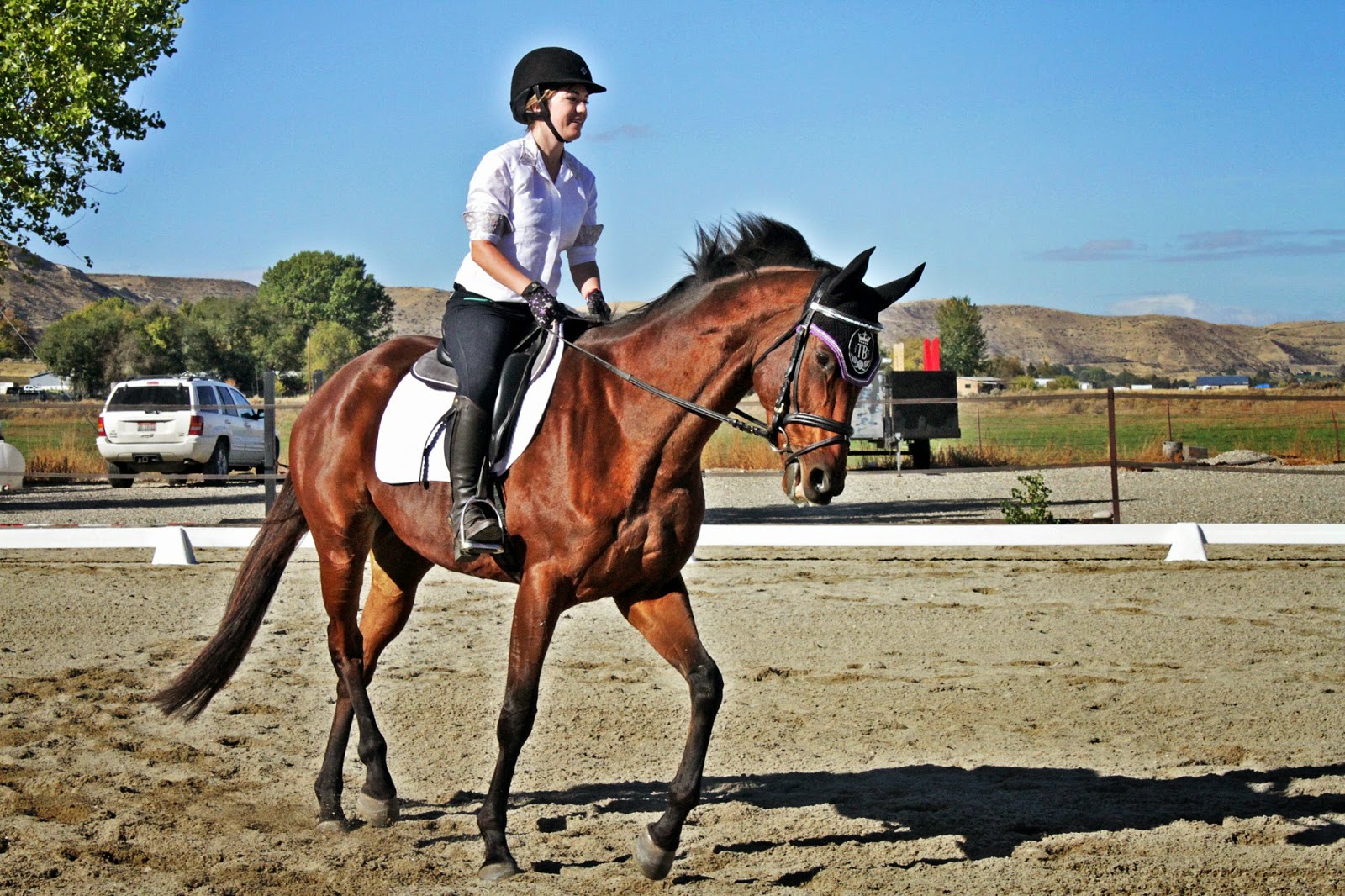 I felt disappointed afterwards, but it was fairly short-lived. I need to remember that I haven't done this for very long, and Bacon and I are still learning  A LOT.  And I am on one nervous girl, and I am a ball of nerves, and yet we can survive and do better each time. I got to look at my test soon after, and I had scored a 44. We had a 4 on our free walk, but had mostly 6s and 7s, and even an 8. The comments were very nice and everything felt promising again. And I had already passed my first goal!